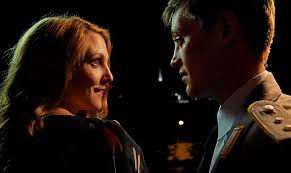 A cleaning lady discovers the bug on Linda’s desk. It seems obvious a spy has put it there, and there is an investigation. Wolfgang informs Moritz he will be questioned, as they know he has been seeing Linda. Moritz is later given a coded message from the East, which says he either has to convert Linda to the East, or kill her.

He and Linda have a picnic where they drink wine and skinny dip. It looks like Moritz is about to leave her in the middle of the lake, but when she begins to drown he goes back to rescue her. He asks Linda if she’d run away with him, and she says yes. He then gives her his grandmother’s ring, which Linda takes to be a marriage proposal. Moritz tells her he is a spy, but for the West, and that he will be working in the East.

When questioned by the military about Linda, Moritz says it was just a one night stand and they are no longer seeing each other as she went back to an ex-boyfriend. He says the desk was intended for Mayer, who gave it to Linda. Moritz goes back to Linda’s hotel room, and she has found out about the leak. Moritz tells her she has to stick to the same story he gave, then she will not be blamed, Mayer will. He also says she can get money to pay off her debts. Linda looks distressed throughout this, and asks Moritz how he knew about her debts. As he goes to get her a glass of water she runs away.

Moritz panics and phones Tobias saying he doesn’t know what to do. Tobias tells him that he should go back to the base as if nothing has happened and he’ll sort it out. Moritz instead tries to find Linda. He catches up to her in a forest. After a struggle, Linda pleads for her life and Moritz says he won’t harm her. Linda tells him that she used to be Mayer’s girlfriend. He ended the affair as he chose to stay with his wife for the sake of their daughter, but Linda knows him well enough to be certain that he is no spy. She has worked it all out. Mortiz is the spy, he’s working for East Germany and Moritz isn’t even his real name.

Moritz tells her he still loves her, but Linda says she doesn’t love him. She hits him with a branch before running away again. She spots a car and tries to get it to stop, but it ploughs straight through her. It doesn’t kill her instantly, but she is dying. Moritz finds her, tries in vain to save her life and holds her as she slips away. He is given a spade to bury her in the woods. Moritz cries over Linda’s corpse. He removes his grandmother’s ring, kisses Linda’s body and buries her in a shallow grave in the woods.

Later on, Lenora meets Mayer in a car park. She asks him to work for the East. He says he’d rather die. Lenora reveals they have pictures of him and Linda together. Mayer says
he doesn’t care if they reveal it even though it will definitely end both his marriage and his career. Lenora lies that Linda was a spy for the East. Mayer knows that he is in the East’s pocket now. He goes to his desk, looks at a picture of his daughter, and puts his gun in his mouth and shoots himself.

Mortiz then goes to Yvonne’s ashram and makes out with her in a nightclub.

Meanwhile, the university is organising a huge peace rally. Tobias invites Alex to a press screening of a film. Tobias feels Alex’s leg, and Alex walks out of the cinema. In the Edel’s house, Alex and Wolfgang have a huge argument. Wolfgang has nothing but contempt for the peace rally. Alex accuses his father of wanting to start a nuclear war. Wolfgang says that’s the last thing he wants, and Alex is lucky he wasn’t around when Germany was under Nazi control, which was when Wolfgang grew up. Alex says Wolfgang is a Nazi like his father was. Wolfgang goes to hit Alex, but accidentally hits Ursula instead who comes
in between them to stop it. Wolfgang tells Alex he isn’t welcome in the house anymore, so Alex goes to Tobias’ house, and they kiss.

In the East, Annett confronts Thomas and tells him she knows about the stash of forbidden books, and says she doesn’t want Ingrid getting mixed up in it.

‘Northern Wedding’ was the darkest episode yet. The series had been partly comical before, but things took a different turn in this episode. While they weren’t the first characters to be killed off, Linda Seiler and Henrik Mayer were the first we’d got to know properly.

Linda is one of the most tragic characters in this series, and her death was brutal, upsetting and horrifying. Clearly, Moritz didn’t want her to die, but it is at least partly his fault she did. Because of the various ways Moritz messed up, Linda ended up losing her life. Her final scenes are gut-wrenching. I thought Linda was a good character, and it’s a shame she wasn’t in more episodes.

Henrik’s suicide is also hard to watch, and probably as graphic as the series got. He wasn’t a malicious character either, he wanted security for the West and to make sure that they would avoid nuclear war, and he seemed to love his daughter. Having an affair turned out to be a mistake which cost him severely. While the series has shown that the stakes are high with political and military games and the risk of war, seeing two of the people who are caught up in it dying brings it home just how high those stakes are.