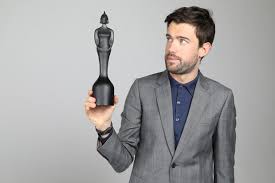 The BRIT Awards 2020 was the 40th one, and for the third year in a row presented by Jack Whitehall.

There always seems to be a lot of crossover between winners of awards and artists who perform for an award ceremony, and that was the case this year, though I prefer that to when you get loads of “sorry I can’t be there” video acceptance speeches.

I’m certainly glad they had the Rising Star (previously the Critics Choice) award
winner perform! It makes a lot more sense than what they used to do, announce the winner, then briefly chat to them at their table. Sometimes not even that, I remember
all Emeli Sande got in 2012 was a mention of it, and then a blink and you’ll miss it shot of her at her table!

This year the award went to soul singer Celeste, who gave a classy, smoky performance of her track ‘Strange’, and then she went to collect her award, which was presented to her by last year’s winner Sam Fender.

Lewis Capaldi got two awards, Best New Artist, which he went to collect carrying a bottle of Red Stripe and his acceptence speech was audio muted on the TV broadcast
because he was swearing before the 9pm watershed. For his second award, Song Of The Year for ‘Someone You Loved’ (which he performed earlier), Lewis Capaldi went up
drinking from a bottle of Buckfast, and said that the song wasn’t about his ex-girlfriend, who is on reality TV show Love Island at the moment, but about his grandmother’s death. He jokingly thanked his grandmother for dying! And his parents for having sex, as he wouldn’t have existed without it! He’s a lot more interesting than his music is. OK, as the ceremony pointed out he’s had the biggest selling album and single of 2019, it’s obviously working for enough people, but personally I find his music a bit boring, sorry.

Mabel opened the show with a pink and blue filled performance of her hit single ‘Don’t Call Me Up’, which also featured lots of rotary telephones. She won the British Female Solo Artist award. She gave a shout out to all the other nominees in the category, and also to her mother Neneh Cherry and the fact that it was 30 years ago to the day that Neneh Cherry won two awards and performed at the 1990 Brit Awards.

Billie Eilish, along with her producer brother Finneas, The Smiths guitarist Johnny Marr, composer Hans Zimmer and an orchestra performed the new James Bond theme ‘No Time To Die’. There was an icy aesthetic with the background effects, with ice cracking, and that fitted with the song.  While it is a big James Bond song, Billie Eilish delivered it in a very intimate way. The whole performance was very atmospheric and compelling. Billie Eilish won the International Female Solo Artist award, and said she had felt very hated recently, and after seeing the audience all smiling and cheering to her performance she was moved to tears. It was sad when she said she felt hated. She has said in other interviews she now understands celebrities who said that there is a lot of pressure that goes with fame. She has had a lot of success in a very short time, and there has been a lot of reactionary bullshit directed towards her. That’s nothing new, but I suppose it’s one of the those things social media amplifies. That’s a whole other can of worms altogether though, so let’s not open it. On more positive notes, Billie Eilish praised all the other nomniees, and hugged Melanie C (who presented the award), and said to Melanie C “Thank you, Sporty!”, and after this performance ‘No Time To Die’ has gone straight in at number one in the UK charts!

Stormzy won the British Male Solo Artist, and on his medley performance each song was done very differently! He began sat on stool and backed by a gospel choir singing ‘Don’t Forget To Breathe’, then walked up to a stage which had a band and pyrotechnics to perform ‘Do Better’. Then he went onto a moving platform which had red lights and smoke to  performed ‘Wiley Flow’, which was originally a homage to Wiley, but Stormzy and Wiley have had some public arguments on social media recently, so…  Then it went into  ‘Own It’ with sunshine symbols, orange lighting and dancers, and he was joined by Burna Boy who features on the track. The Burna Boy sung ‘Anybody’, and the performance ended with a big crowd onstage under a rain machine singing with Tiana Major9 for ‘Rainfall’ – a song which samples ‘Shackles (Praise You)’ by Mary Mary.

There had been some controversy before the ceremony about the general lack of female nominees this year, and I think Stormzy was addressing that when he accepted his British Male Solo Artist award. He thanked a lot of people, but made particular mention to the women that worked with him, saying “the best males are nothing without these incredible females”.

Harry Styles peformed ‘Falling’, which had two piano players with pianos that were leaking water in a pool over a stage surrounded by clamshells, with Harry Styles dressed in an outfit which looked like it was made out of a load of doilies. I’ve no idea what that was meant to be getting at. I wasn’t sure about the bright yellow suit and purple cravat he wore for his main outfit to attend the ceremony either. Lizzo performed a medley of her songs ‘Cuz I Love You’, ‘Truth Hurts’, ‘Good As Hell’ and ‘Juice’, and she got the audience to sing along too. Both Harry Styles and Lizzo were performers who were nominated, but didn’t win. However, they were one of my highlights of the whole thing, for the parts when Jack Whitehall was interviewing them. They were at different tables that were next to each other, and came into each others interviews. Lizzo in particular was a breath of fresh air, at one point telling Jack Whitehall she was “lost in your eyes”, and I think my favourite moment was when Harry Styles had a pint glass of neat tequilia, and Lizzo drank it!

The exclusive club of winners who didn’t perform was Foals and International Male Solo Artist winner Tyler, The Creator, who sarcastically thanked Theresa May for
making it “impossible for [him] to come to this country five years ago. I know she’s at home pissed off”!

The big award of the night, British Album of the Year, was won by Dave for Psychodrama, which also won the Mercury Prize last year, the first time that’s happened
since the Arctic Monkeys won the Mercury Prize in 2006 and the BRITS best album in 2007 with Whatever People Say I Am, That’s What I’m Not.

Dave performed his single ‘Black’ earlier. Musicians sometimes like to make a statement with their performances, and Dave very much did that! ‘Black’ is a very political song anyway, about what it means to be a black person in this world, and it was even more political with Dave’s freestyle rap at the end. He said of Boris Johnson “The truth is our Prime Minister is a real racist”, and he talked off the Windrush generation, the press coverage of Meghan Markle, and paid tribute to terror attack victim Jack Merritt. Pictures of Jack Merritt and Saskia Jones, who was killed in the same terror attack, were used as well. Dave also said “Grenfell victims still need accomodation”, something Stormzy noted to in his freestyle rap at his 2018 BRITS performance.

Finally, to close the show Rod Stewart performed with the Royal Philharmonic Orchestra, singing ‘I Don’t Want To Talk About It’, then Ronnie Wood joined him to
perform ‘Stay With Me’.

It wasn’t on the main ceremony, but I loved that British Group nominees Bring Me The Horizon came dressed in outfits based on what the Spice Girls wore to perform for
the 1997 ceremony!

There was also the backstage interview moment when Stormzy went up to Billie Eilish to gush to her “Every time I listen to the new song of yours I go on A-to-Z lyrics and I read it. And I’m like. bruv, she’s brilliant pen.”

I thought Jack Whitehall was OK as the host, though most of his jokes weren’t. To be honest, the only one I liked was saying they could have some “witty banter” with Dave, “witty banter” being the slogan of the TV channel Dave.

For most of the show Jack Whitehall had a light hearted, snarky tone, but he was also able to convey the seriousness and the tragedy of the recent death of TV presenter Caroline Flack, who had hosted BRIT Awards backstage coverage on ITV2 in the past. Harry Styles wore a black ribbon as a mark of respect to her.

The BRIT Awards 2020 were fine in terms of rewarding what has been successful and relevant in the past music year, and there seems to have been more interest and involvment in it than usual, so the 40th BRITs was on the whole a strong one.