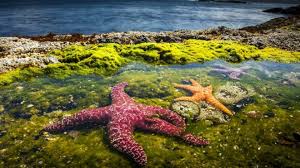 The coasts are where the land meets the sea, and with these two different environments running into one another, a lot goes on.

The episode opens in Costa Rica, where an olive ridley turtle swam a thousand miles to be there to lay her eggs on dry land, the exact same beach she hatched from ten years ago. There are hundreds of thousands of pregnant turtles here. To them, the land would be an extremely unusual environment. They spend most of their life underwater, so just as we view under the sea as an “alien world”, then turtles may view land that way too.

In the Galapagos, there are sea lions. I thought they sounded a bit like Barney Gumble from The Simpsons burping! But they don’t really deserve to be laughed at, as they are clever hunters. A group of young bulls were shown hunting for yellowfish tuna, working as a team. One herded the tuna towards the cove, then when they gave him the slip he teamed up with another sea lion, who blocked off their escape, then they picked the tuna off one by one. They may one day fight each other for control of a harem, but it’s in their interest now to team up.

The gravity of the Moon pulls at the sea creating tides, and the tides cause the coasts to change. Sea creatures can come to harm here, as they risk drying out and burning in the sun. We see some seaweed which meets that fate. Luckily for sea creatures, they have the ability to move. Starfish are shown making their way to the rock pool. Rock pools look beautiful and tranquil to us, as do a lot of the creatures in it like starfish and anemones. But what’s actually going on in there is a very different story. The programme sped the footage up so that minutes became seconds, and a rockpool is crowded and dangerous to the inhabitants of it. To limpets, an ochre starfish is a huge monster which devours everything in its path. Anemones also gulp down everything they can reach. Not that the limpets haven’t evolved ways to defend themselves. Some have a slippery shell so they can slide to safety. Some have a kind of bodyguard, a scale worm, which bites back at the starfish! Clingfish have teeth which go over shells, and twist limpet shells off “like a bottletop”, and then eat what’s inside, AND the shell!

In Brazil, Sally Lightfoot crabs wait for the tide to go out to feed on the seaweed left behind on rocks. Their sidewalk and the way they leap over the water to the rocks as if jumping over puddles looks quite comical to us. But they do it for very good reason. There is danger lurking under those rocks. Octopus can come out and get them, and the Moray eel, which can slither onto land and has teeth which can crush the crab’s shell.

Waves crash on coastlines, and over time they change the shape of the rocks.

In the Arctic, there are jagged cliffs full of nesting seabirds. One is a puffin, a beautiful bird, which is ridiculously and adorably cute, even more so are their fluffy grey chicks, known as pufflings! They are often compared of penguins, and they have some similar behaviour, such as the parents sharing responsibility of raising the chick and taking turns to fish. Like penguins, puffins can also ‘fly’ underwater, though unlike penguins, puffins can also fly in the air too. In fact, one we see has to fly 60 miles to get fish for his chick.

When you think of pirates, if any bird springs to mind it will probably be a parrot, but the bird described in the narration as “the pirate of the skies” is the skua, and it’s known as that because it steals the hard earned catch of puffins and guillemots. The dad puffin we follow DOES make it back to the nest with his fish, it took him 3 hours and 60 miles travelling, but he made it. He and his partner knock their beaks together in greeting. Awww. I said they were ridiculously cute, didn’t I?

Penguins have their moment in the spotlight in this episode too, specifically king penguins. They spend most of their life in the sea, which is why they lost their flying ability in the first place. They were shown having to make their way through a beach full of elephant seals. The bulls have fierce, bloody fights for control of the harem, and the penguins risk getting caught in the crossfire. The king penguins go through a catastrophic moult, where they shed their damaged coat of feathers, and wait for a new one to grow. This takes a month. As they can’t go into the sea, as their feathers are what protects them there, this means they can’t fish, so therefore, they have to go without food for a month!

Blenny are a fish which no longer live in the sea at all, ones we see live on top of a cliff! They still to stay damp, but they nest in rock and graze on algae. You can see evolution right there with them, as they are a fish, but look and behave very like frogs, and certainly seem to be going in an amphibian direction. It also shows that evolution isn’t always a completely positive change. Often, there is some sort of trade-off, like penguins losing the ability to fly, but gaining more suitability for a life in the sea, for the blennys, they have kind of the opposite issue, as they have become fish which can’t swim very well, and have to leap away when the tide comes in!

Blennys have the ability to change colour. The male changes himself black and orange to attract a female, and once she’s attracted, they go to his cave, he performs a dance, she lays her eggs, and he fertilises them.

It is increasingly difficult for many seabirds given that there are fewer and fewer fish now, which we have to take some responsibility for. For animals on the coastline, our presence could cause problems too. Coasts have long been popular places for build settlements, obviously access to the sea is beneficial, for food, industry and trade. Two thirds of major cities are on coastlines, and the coasts that have no human development probably won’t stay that way forever.

We may consider the natural world separate from us in some way, but the truth is we are part of it, we are part of the same planet. What we do affects it, and what happens to it will ultimately affect us.