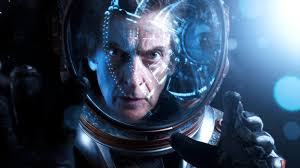 Although the episode turned out to be a lot more sombre than that concept might suggest.

The Doctor wants to go into outer space again, and as there is a distress call coming from some time somewhere in outer space, so of course that’s where he wants to go. Bill is coming, and so is Nardole.

The Doctor, Bill and Nardole speak to the computer in the suit, who is named Velma. She tells them that the spacecraft has never had any oxygen. Oxygen is available “for personal use only at competitive prices”. Only the spacesuits have oxygen, and you have to pay for it. Velma goes on to tell them that “unlicensed oxygen will be expelled to protect market value”. What that means is that the airlock will be opened and all the oxygen will be let out into deep space… which for the TARDIS crew means THEY are in danger of being sucked into deep space with it!

The suits have been told to “deactivate their organic component”, by which they mean kill the people who are wearing them! When they do kill them, the people are told “Please remain calm while your central nervous system is disabled”.

There are more suits with corpses in walking around trying to kill the TARDIS crew, but they have no choice but to wear empty spacesuits, as they are the only source of oxygen. They manage to get to a room full of surviving crew members. Soon, the suits come and kill the commander! The others are forced to go outside into the vacuum of space.

Bill’s spacesuit malfunctions, so it removes her helmet. She has a force field which will give limited protection, but hardly enough, as we can tell when we are shown what is happening from her perspective; her vision is blurry, she can’t hear and soon she passes out.

Bill wakes up, and the crew appear safe for now. The suits are just outside the room, but can’t seem to enter it. It is a new room, and the suits are using an out of date map. They are machines, so they follow programmed instructions, not logic. Nardole compares it to a Sat-Nav not recognising a new road.

Bill is told that the Doctor gave her his helmet, but he ended up losing his sight, though he claims he’ll be able to fix that once he gets back to the TARDIS.

Apparently a rescue ship is on the way, but the suits find their way in, and kill another crew member. The others head for the reactor core, but Bill’s suit stops still. She can’t move. The Doctor says they’ll have to leave her, but assures her she won’t die. Bill is understandably terrified, and she appears to be killed by the suits.

In the reactor core, the Doctor wires everyone’s life signs to the coolant system. This way, when the suits kill them the whole ship will blow up. The Doctor says that what happened wasn’t the result of hacking or malfunction, it was planned. The company found the workers to be inefficient, so they wanted to get rid of them. The “rescue ship” are their replacements!

The Doctor tells the suits that the crews deaths will be expensive, as if they die the whole station goes too. The suits don’t kill the crew, and instead give them oxygen tanks.

Oh, and it turns out Bill wasn’t dead her malfunctioning suit didn’t have enough battery power to kill her. Then the Doctor fixes his eyesight in the TARDIS… except at the end it’s revealed he hasn’t. He is still blind.

As I said at the beginning, TV guides portrayed this episode as being about zombies in space, but it wasn’t zombies as such, the spacesuits were the ones that were moving, the corpses were just being taken along. Doctor Who has a way of trying to give sci-fi explanations when it uses supernatural concepts, such as in series 5 ‘The Vampires Of
Venice’ being an alien species.

Velma’s voice appears to have been provided by a text-to-speech program. It made me think of The Nekci Menij Show, it sounded a bit like Kety Perr’s voice. It is kind of funny to imagine Katy Perry in Doctor Who come to think of it. Well, she did do a song about, er, getting frisky with an alien.

There was a lot of the company using language to gloss over what they were doing, using euphemisms and packaging it in cold, corporate and/or technical jargon. It is partly funny in a black comedy sort of way, but it is also something that is done in real life by companies, military and governments.

One of the spacecraft’s crew was a blue skinned alien, Dahh-Ren (Peter Caulfield). Bill is shocked as she has never seen one before, and he thinks she’s racist. Many sci-fi shows explore race issues through inventing an alien species. Dahh-Ren is surprised that Bill has experienced racism herself. I suppose it’s one of the more optimistic visions of the far future in this episode, that racism towards humans at least will no longer exist.

There were puns in this episode, “fighting the suits” and “save your breath”, which I wasn’t keen on, but I’m not keen on puns most of the time anyway.

‘Oxygen’ reminded me of the Red Dwarf episode ‘The Last Day’. Not just that both this ship and Red Dwarf were mining ships. ‘The Last Day’ involved Kryten, a mechanoid rather than a human, but he was also a worker who the company that manufactured him had ordered to be destroyed after being considered obsolete, and with a replacement being sent. In Kryten’s case, he was well aware of what the company planned unlike the crew in ‘Oxygen’, but he was programmed to believe his lifetime of servitude will be rewarded in an afterlife, Silicon Heaven. That is incredibly cruel, but Red Dwarf being a sitcom they got some laughs in. The Electronic Bible apparently says “The iron shall lie down with the lamp”, which I thought was hilarious. So I do like puns sometimes.

Oxygen is something we all depend on and take for granted, and on Earth there is plenty of it, but in space there isn’t. When something is rare it becomes valuable, and it is terrifying to think some could try to exploit that for their own gain, but it wouldn’t be the first time people have done that.

The episodes writer Jamie Mathieson originally planned this to be a prequel to his first Doctor Who episode, ‘Mummy On The Orient Express’ in series eight.

‘Oxygen’ was fine. It was satire of capitalism if it were applied at its most ruthless. It was well written in the sense that everything was explained. They even had the Doctor delivering a lecture at the university about what would happen to someone exposed to the vacuum of space. They take away the TARDIS and the sonic screwdriver to up the peril. It was one of the darker episodes, particularly how Bill was effected from being in the vacuum of space, and it’s ending was something which would be very important to the next few episodes.

This entry was posted in Doctor Who, TV and tagged doctor who, episode 5, oxygen, series 10, tv. Bookmark the permalink.