Doctor Who – ‘The Girl Who Died’ 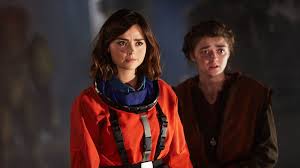 The Doctor and Clara find themselves in a Viking village. The Doctor tries to pretend he is the Viking god Odin, but in a case of alien one-upmanship, another extra-terrestrial species tries the same trick by creating a giant floating head of Odin in the sky. It is from The Mire, an alien species who are constantly picking fights. They come out, scan who are the strongest warriors and teleport them on board. Clara and a Viking girl named Ashildr are among them because they are both wearing technology that is futuristic at this point in history.

The Vikings who have been teleported think they are in Valhalla, the rewarding Viking afterlife for the greatest warriors. In fact it is a death trap. A wall closes in and pushes them towards a path of death lasers.

Clara and Ashildr are still alive, because the Mire realise that Clara posses technology far in advance of what should be for this time, so are more wary. The Mire have blended the warriors into a liquid and drink them, believing their strength and skills will be passed to them. Clara tries to talk them into leaving now they have got what they came for, but Ashildr tells them they should pay for mocking the Viking gods and killing the village warriors. The Mire leader is pleased that they have been challenged and says they will come tomorrow for battle.

The Vikings would rather fight to the death than run away, but realistically it’s going to be a massacre rather than a battle. The Mire are far more advanced technologically, and even if they weren’t, they have killed all the warriors in the village, leaving only farmers and fishermen.

The Doctor sees a further problem. He could try and intervene. Saving this undefended village would be the right thing to do, but what are the consequences? If it gets around that the Mire were defeated by one small village there may be more invasions, maybe even causing the end of the world. He ultimately decides he has to stay and attempt to save the villagers. He tries to train them for battle, but it doesn’t get anywhere fast. The Doctor hears a baby crying, and as he can speak baby he translates what she is trying to say as “fire in the water”. The baby settles down when she sees the fish in the barrel, and the fishes that she is referring to are electric eels.

The Mire arrive the next day, to find the Doctor, Clara and the villagers having a party. The Mire say they will go into battle regardless. The villagers attach metal to the Mire’s helmets which they connect to the water with the electric eels, creating a magnet which pulls off the helmets. Then a giant serpent with huge sharp teeth comes through. The Mire teleport away in fear. This was nothing more than an illusion. It was a puppet Ashildr made and the Doctor hooked her up to a machine to project that image to the Mire. Clara recorded what was happening, and it shows the Mire cowering against and running away from a wooden puppet, and they add Benny Hill music to it making them look even more ridiculous. The Doctor threatens to show that to the whole galaxy, which will ruin the reputation as ruthless warriors the Mire spent their whole lives building for themselves. The leader vows revenge, but is teleported away.

The village is happy, but they find that Ashildr has died, the power of the machine overwhelming her. The Doctor is distraught at the fact people he meets end up dying. He notices his reflection, and remembers why he choose his current face. It is the same as Caecilius, a man he met during ‘The Fires of Pompeii’. During the volcanic explosion of Vesuvius, Donna begged the Doctor to go back and at least save someone if he couldn’t save the whole town, and he saved Caecilius and his family. The Doctor chose his face to remind him he can try and save people even if it means bending time travel rules. He gives Ashildr a computer chip from the Mire which repairs them from injuries, and another which she can give to someone she chooses. She is bought back to life, not only that she is now immortal as the chip will continue to repair her whenever she is injured. But soon after, the Doctor thinks he may have made a mistake. He well knows that conceivably living forever is a curse as much as it’s a blessing. Not only that, but as Ashildr is now technically part human and part Mire, she could be the hybrid Davros was talking about in ‘The Witch’s Famililar’. We end with a shot of Ashildr with the world changing around her over time, and she initially looks happy, but becomes sadder as more and more time passes.

This episode finds a way of explaining around the fact that Peter Capaldi played a previous character, similar to how Freema Agyeman’s character in ‘Army of Ghosts’ was retconned to have been Martha’s cousin after she was cast to play Martha.

There is a lot said in ‘The Girl Who Died’ regarding the rules of changing history, the difference between ripples and tidal waves. In other words, it’s OK to change small things but not big things. But as Holly from Red Dwarf once put it, there’s no such thing as small when you’re on about changing time, and as Homer Simpson discovered when he went back in time with a toaster, stepping on a mosquito or killing the dinosaurs by giving them the common cold led to a worlds where Ned Flanders was unquestioned dictator of all Earth or it rained doughnuts.

This episode was a bit daft. I get that the episode is aiming to be comedic. The giant head of Odin is likely a shout out to God’s head appearing in the clouds in Monty Python and the Holy Grail.

I don’t tend to like medieval ‘romp’ episodes of Doctor Who. I quite liked ‘Robot of Sherwood’ last year though. It’s been suggested a difference with that episode and this i that Robin Hood is a myth anyway while Vikings were genuinely part of history, but I don’t think that’s why for me.

I’m not as bothered about the historical inaccuracy as some seem to be. Yes, it’s a myth that Vikings wore horns on their helmets just like it’s a myth that pirates made people walk the plank, but I don’t blame the show for using artistic licence because they think something will be fun to see, and let’s face it, this is a show about an alien with a time machine. I think for me with this episode the problem I have with it is that the plot doesn’t really seem to matter that much even in context. It’s more there because it’s necessary to have one. It would be a filler episode if not for the fact it introduces a character who’s going to appear in the next episode and it reveals why the Doctor has his current face. It also raises issues the Doctor has with time travel. They have to be careful. Then there’s the moral dilemmas, where doing the right thing can have terrible consequences. There’s the Viking/Mire story, introspection from the Doctor and hints of what is to come from Ashildr, and it doesn’t really flow together as a whole, it’s almost like a patchwork quilt. The episode is the weakest of series 9 so far.

This entry was posted in Doctor Who, TV and tagged doctor who, series 9, the girl who died, tv. Bookmark the permalink.